So we finished the race and got our medals.  They have either free beer or wine at finish line but we skipped this and headed into Epcot. We decided to wait to change until we got in park.  The line for bag check was quite long.  We met with our friends Laura and Robert that finished before us and headed toward Soarin.  Since Soarin would be closing soon and refurbished we all wanted to get in one last ride.  I found a bathroom on top floor of "The Land" and went in to change. I found the best bathroom stall way way in back of this bathroom around a corner. It was huge. The Penthouse of bathroom stalls!  Plenty of room to change and wipe myself down with the big wipes given to me.  I put on a dress and flip flops and was ready to party. Here's a pic of my last time on Soarin (pre refurb) 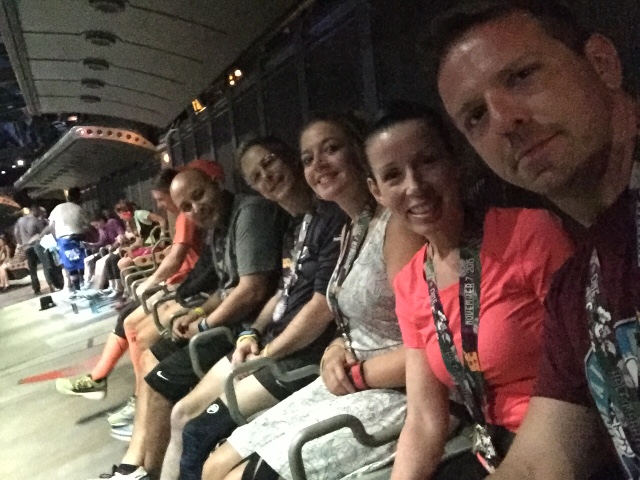 At this point Shannon had finished the race and was changing so we decided to do a quick ride on Test Track as well. 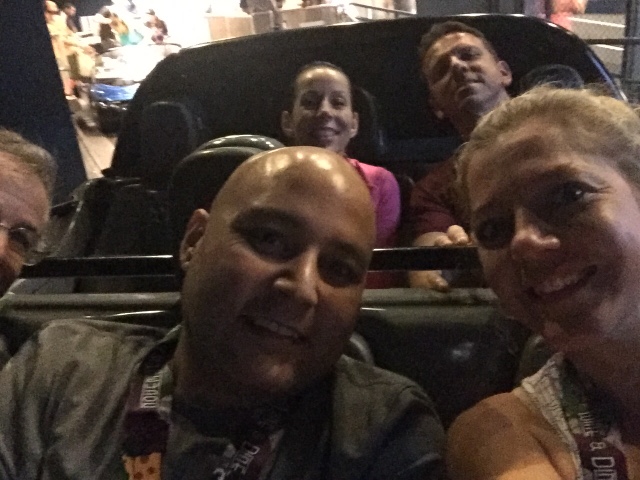 Not the greatest pic but I do love this ride!!!
After this we met up with Shannon and some others and made our way to world showcase. We had plans to meet anyone that wanted from our group in England at the sundial.
I had my traditional drink English Rose (I swear they changed the recipe, not as good) it was packed inside Rose and Crown.  We all waited a bit. I was surprised how crowded everything was. I guess I shouldn't have been but was. 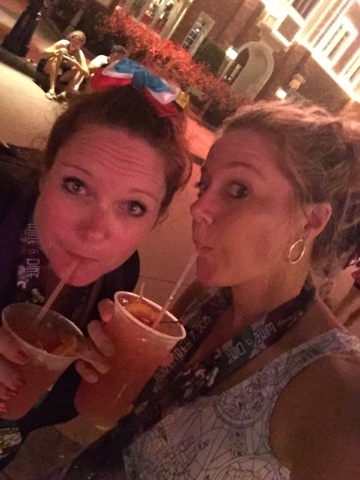 Here is a pic of all the people we met up with that night at Epcot.  Such an amazing group of people.  I have to say even though race was cut short it was kindof nice having everyone at the afterparty feeling good and no stories of getting swept or injured.  Not sure it would've been the case had the full 13 miles taken place. 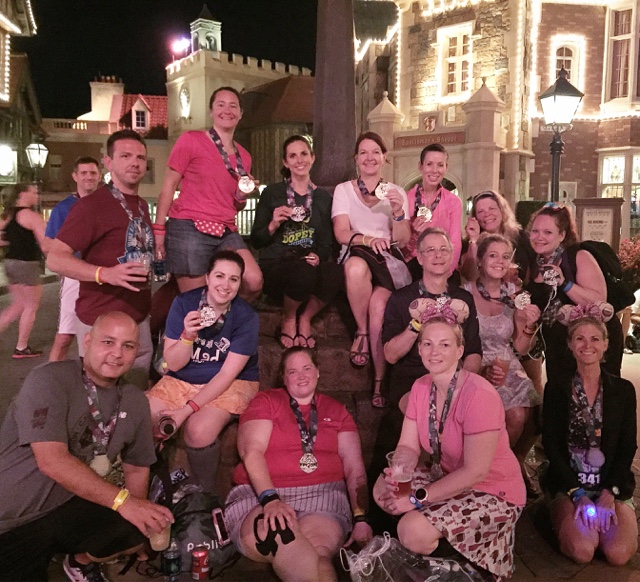 After this we hung out a bit and during the last 45 minutes decided to try and do some character pics. So here we were running through world showcase at 3:00am trying to get pics.  We missed Donald by a few seconds. Still bitter they didn't let us take a quick pic. Here's some of the after party characters 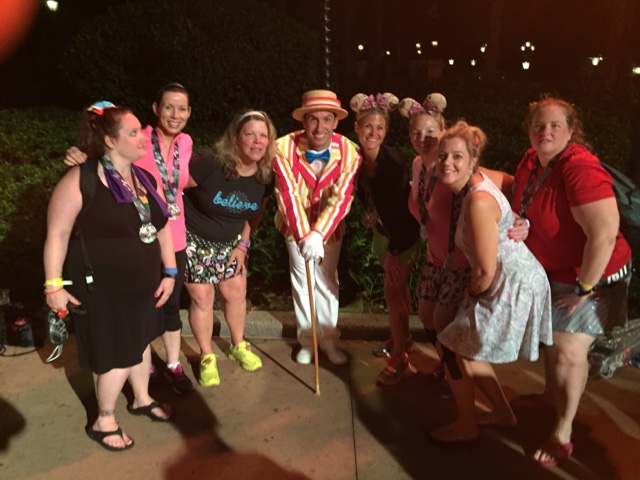 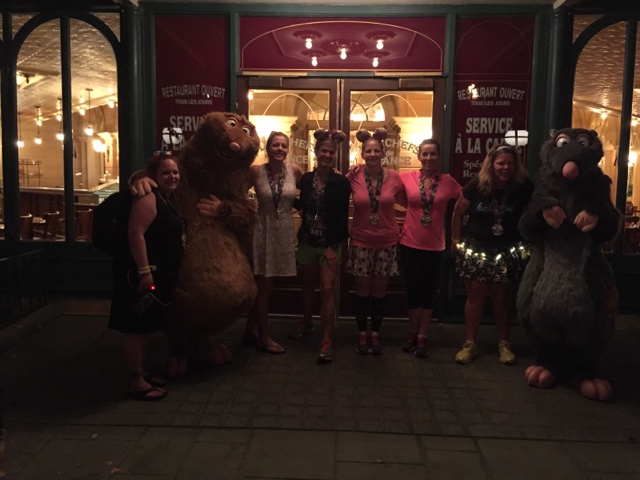 Emile and Remy from Rattatouille 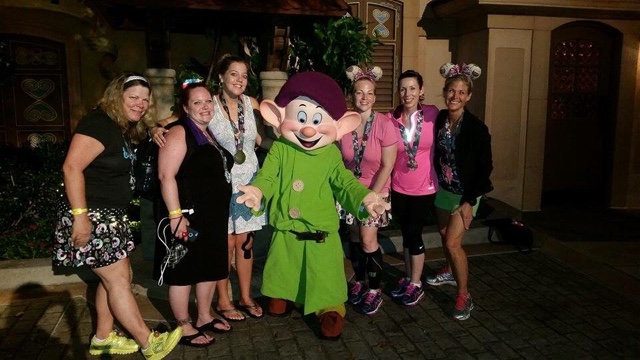 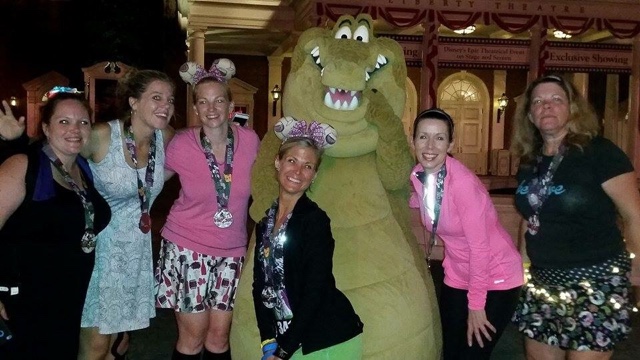 Crocodile from princess and the frog 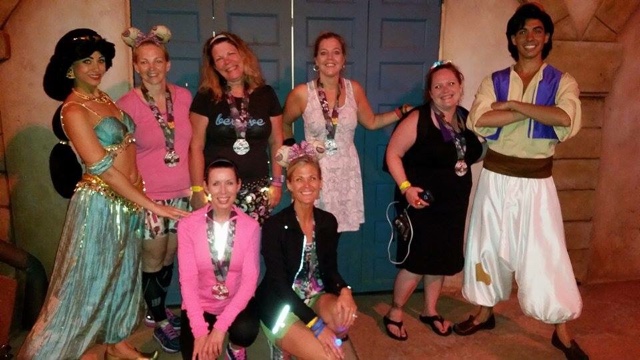 Jasmine and Alladin
There's so many pics on this trip id love to share and hard to narrow to a few.  The after party was great: time went so fast and we weren't ready to call it a night. We stayed til about 4:30.  One of the last to leave the park.
We walked back to the Beach Club resort and decided to take a dip in the hot tub at 5:30am 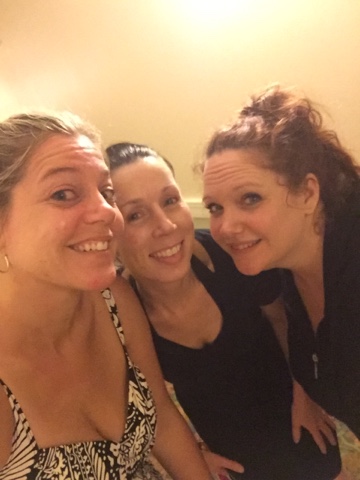 We look a little tired
Got to sleep around 5:30.  Plan was to not set alarm: figured we'd wake around noon (yeah right)
Posted by Unknown at 8:43 PM