First of all, here's a little info about me.  My name is Jackey.  I'm 37 and have been a stay at home mom for about 10years to 3 boys.  I'm close to my friends and family and loving trying to be adventurous when possible.  Im a big goofball, I love anything 80's, dancing, and having fun.
About 3 years ago I met some internet friends in Disney for 24 hours in the Magic Kingdom on Leap Day.  This was a big deal for me to leave my family and kids to go do something I love but without them.  However I had a fabulous time and made new friends and lifelong memories.  While there we had agreed to do the Princess Half marathon in 2013 and one day do the Disney full marathon.  Maybe it was just a pipe dream in the moment but I was super excited about these potential plans I started working toward these goals.

My first Disney run ever was the Princess Half in 2013.  Again had an amazing time and met more Internet friends.  Which had become genuine real friends by this point.  I also did the Dumbo Double Dare Challenge in August 2013, and the Wine and Dine half in November 2014.
The biggest challenge for me though would be to complete a full.  26.2 miles.

I signed up on April, and my "leap day friends"'did as well.  I was so excited about it.  I've never been a hardcore runner.  But if it gave me an excuse to go to Disney I'd be willing to put in the time to get there.  On an impulse  decided to sign up for the Goofy Challenge which consists of a 13.1 Half marathon on Saturday and the 26.2 full marathon on Sunday.  I just wanted 3 medals.  To go all that way I knew I'd feel happier coming home with more bling.  Knowing this full marathon was inching closer each passing day my countdown to the race made me nervous.

Unfortunately the plans I made with my "leap day friends" fell through and I was losing my motivation as summer ended and fall began.  I wasn't too consistent with my runs.  In early November I decided I would defer my run because I knew I probably wouldn't be ready.  And then I went to do the Wine and Dine half .  While there at the expo I saw the medals I would receive if I completed the Goofy Challenge.  That Goofy medal won me over and I decided I wanted this.  Even if my other friends weren't able to do with me .  I started buckling down and training mores. I adapted the Jeff Galloway run/ walk method and would do two shorter runs and one long run a week.  I built up from about 10, 13 and maxed out at 17 miles on Dec 20.  About 3 weeks before the race.  Would I be able to do it?!? Below is a pic of my longest run.  Technically 17 miles but the ap shut off :) 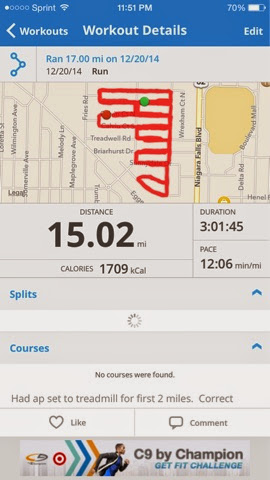